Covid19 has without doubt had a huge effect on everyone around the world.

The virus reached the country in late January 2020. As of 24 September 2020 there have been 416,363 confirmed cases and 41,902 deaths of confirmed cases, the world's tenth-highest death rate per hundred thousand population. There were 57,448 deaths where the death certificate mentioned COVID-19 by 6 September. More than 90% of those dying had underlying illnesses or were over 60 years old. The infection rate is higher in care homes than in the community. There has been large regional variation in the outbreak's severity.

In March, the UK government imposed a stay-at-home order, dubbed "Stay Home, Protect the NHS, Save Lives", banning all non-essential travel and contact with people outside one's home (including family and partners), and shutting almost all schools, business, venues, facilities, amenities and places of worship. Those with symptoms, and their households, were told to self-isolate, while those with certain illnesses were told to shield themselves. People were told to keep apart in public. Police were empowered to enforce the measures, and the Coronavirus Act 2020 gave the government emergency powers not used since the Second World War. It was forecast that lengthy restrictions would severely damage the UK economy, worsen mental health and suicide rates, and cause additional deaths due to isolation, delays and falling living standards.

All four national health services worked to raise hospital capacity and set up temporary critical care hospitals. By mid-April it was reported that social distancing had "flattened the curve" of the epidemic. In late April, Prime Minister Boris Johnson said that the UK had passed the peak of its outbreak. Daily cases and deaths slowly declined in May and June. The total number of excess deaths in the UK from the start of the outbreak to mid-June was just over 65,000.

As the UK reopens under the new guidelines HFE have put together a range of COVID product essentials to help and support re-opening. Products include floor stickers, roller banners, portable hygiene screens, Covid hygiene procedure signs and door signs. All products from HFE Signs come with a free design service so if you’re looking for something bespoke it doesn’t cost any extra – the HFE design team are waiting to help. 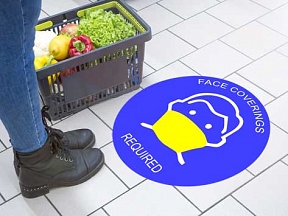 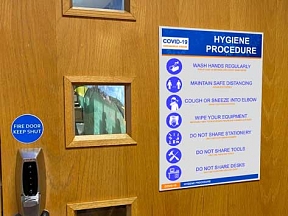 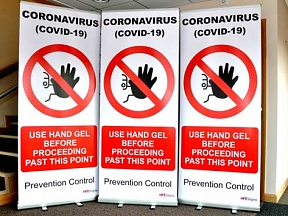