On Saturday 1 July, the JCB Mud Run took place and HFE directors Karl & Emma Hunter were among the hardy souls that participated in this gruelling race.

The course stretched over five miles, with participants having to scramble through muddy pipes, hang off monkey bars and slide into muddy holes. A bit like being Super Mario but with a lot more mud and dirt!

Karl and Emma were part of  a team competing in the Mud Run in order to raise funds for Friends of All Saints School in Denstone, while the event was also a big money-maker for the NSPCC where over £70,000 was generated in total.

Roughly 3,000 people took part in the JCB Mud Run, with banners and flags dotted around the event although whether they managed to stay free of mud is another matter!

Karl completed the course along with his wife Emma and we caught up with them afterwards to see how they coped.

“It was the first Mud Run I’ve done so I wasn’t sure what to expect” said Karl who is something of a fitness fanatic. “I absolutely loved it though and am already thinking about doing a more challenging one later this year.” “It was fun, harder than I expected said Emma, I’ll think about doing it again but if I do I’ll train beforehand!”

The JCB Mud Run started off as a smaller event in 2012, with roughly 500 fun runners taking part, although the event has grown significantly, with lots of event signs being used to direct runners around the various parts of the course.

You can make a donation here, just a quid or two would be massively appreciated for our local Primary School https://mydonate.bt.com/events/foalsummerruns2017/440140 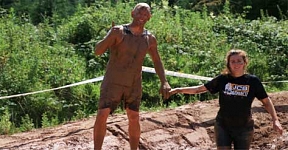 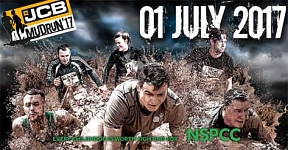