HFE create signage for the borough of Kensington

The Grenfell Tower fire was a tragedy which affected everyone in the United Kingdom, with 71 people dying in the blaze that took place on 14 June 2017.

It was recently the six-month anniversary of this tragic incident and HFE Signs were comissioned to create some banners to help remember the terrible tragedy.

As you can see from the picture, HFE created a display of banner with the message “Children of Kensington: we are the future of Ladbroke Grove” which appeared on a railway bridge near to Ladbroke Grove tube station.

HFE also created a number of lamppost banners that were consistent with the message on the London high street. 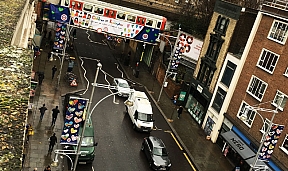